Bitswage
Home Bitcoin 3 Reasons Why Bitcoin Could Retrace Back to $34,000 This Week


Bitcoin dived by as much as 16.33 percent on Monday, almost inching closer to log its worst single-day performance since March 202o. However, the benchmark cryptocurrency narrowly escaped the bearish assault on favorable buying bias near its intraday low of $27,678. 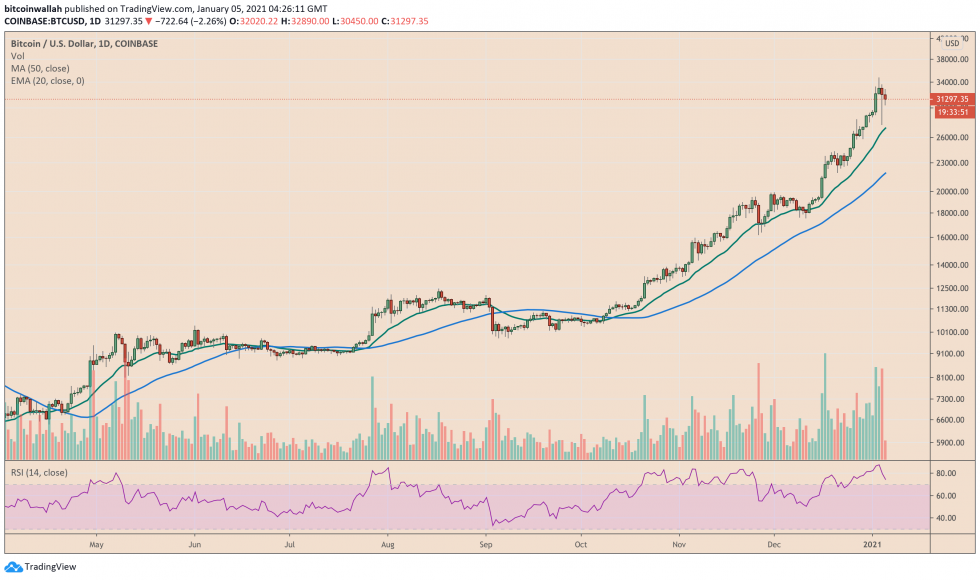 That served as one of the major reminders why the ongoing Bitcoin price rally—an explosive surge from $3,858 in March to $34,810 in January—is entirely different from its notorious bull run in December 2017. Here, every dip is attracting a fresh wave of buyers, confirming that the cryptocurrency could continue its upside move further into 2021.

Here are the three reasons why the BTC/USD exchange rate could inch above $34,000 to retest its previous record high this week.

The last 24 hours have witnessed two mainstream financial firms confirming their exposure in the Bitcoin market. Singapore-based hedge fund manager Three Arrows Capital revealed a more than $1 billion position in Grayscale Bitcoin Trust in its filing to the US Securities and Exchange Commission (SEC).

The news marked more evidence of institutional capital entering the Bitcoin industry—not only to speculate but also to build reliable and regulated investment infrastructures.

“We believe Bitcoin is in its early innings as an exciting new asset class,” said SkyBridge founder and managing partner Anthony Scaramucci. “With the institutional quality custody solutions available today, we believe the time is right to allocate capital and provide our clients access to the digital assets space.”

We @SkyBridge entered the #bitcoin  market in Nov/Dec with a now ~$300mm position, and today launched a #bitcoin  fund offering for accredited investors. We believe we’re in the early innings of a new asset class with tremendous upside. https://t.co/mVx5U4JV31

Bitcoin now trades inversely to the US dollar on a medium- to long-term basis. That is evident if one pits both the assets’ performances against one another in 2020. While the dollar closed the year almost 7 percent lower against a basket of major foreign currencies, Bitcoin climbed by more than 300 percent. 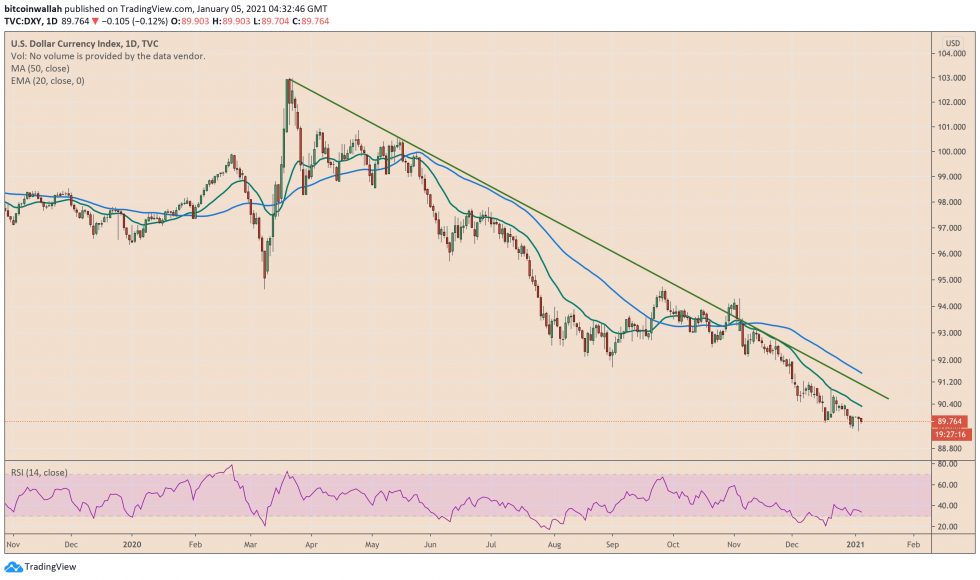 US Dollar Index is looking to extend its bearish bias in 2021. Source: DXY on TradingView.com

The dollar is now looking equally bearish this week and the rest of 2021. It opened the year’s first trading day in negative territory, losing ground to major and emerging-market currencies. Analysts reasserted that the greenback’s declined confirmed an extended demand for riskier assets since March 2020.

The same month saw the Federal Reserve launching its infinite bond-buying program to cushion the US economy from the coronavirus pandemic. The central bank also contained its benchmark lending rates to near zero, a policy that remains intact entering 2021.

On the other hand, Bitcoin served as a hedge against lower bond yields and a devaluating US dollar. The cryptocurrency hopes to fulfill its “anti-fiat, anti-inflation” narrative as analysts anticipate a further decline in the greenback. Morgan Stanley’s strategist James Lord is one among them.

“The dollar has a bit further to go down thanks to the Fed’s average inflation targeting framework, a widening trade deficit, and better global growth,” he said in a note.

On Wednesday, the central bank will release the minutes from its December meeting. Chairman Jerome Powell admitted last month that his office would continue funneling cash into financial markets to avoid a deeper recession. That includes buying $80 billion a month in Treasuries.

The dovish guidance could allow Bitcoin to reclaim path towards $34,000 in the latter half of the week.