A flurry of historical Bitcoin fractals suggests that Bitcoin will continue its decline by another $3,000.

Veteran trader Peter Brandt made the bearish call in a tweet published Thursday, hours after Bitcoin fell by up to 16.31 percent from its local high of $19,500. He added that the cryptocurrency might extend its downside correction until it hits the lower $14,000 levels, citing similar bearish moves during the 2015-2017 bull run. Excerpts:

“During the 2015-2017 bull market in Bitcoin (BTC), there were 9 significant corrections with the following averages: 37% decline from high to low [followed by] 14 weeks from one [all-time high] to the next [one].”

Bitcoin rallied by almost 100 percent six weeks in a row, hitting its yearly high at $19,500 just this Monday. Prospects of growing institutional investments, followed by a favorable macroeconomic outlook led by a depreciating US dollar and negative-yielding debt, allowed the cryptocurrency to grow as an alternative hedging asset.

But the rally also made Bitcoin an overbought asset, as Bitcoinist covered earlier. That increased risks of a blowoff top, i.e., profit-taking by traders, which led its price lower by more than $3,000 in the first half of this week. Only Mr. Brandt thinks that the selling action is far from over, going by how Bitcoin behaves historically after exponential bull runs.

First, the level coincides with Bitcoin’s previous resistance areas. For instance, in January 2018, the cryptocurrency briefly tested $$14,253 as a price ceiling before turning lower for the rest of the year. In June 2019, BTC/USD’s bull move topped out at $13,868, also very near to Mr. Brandt’s downside target. 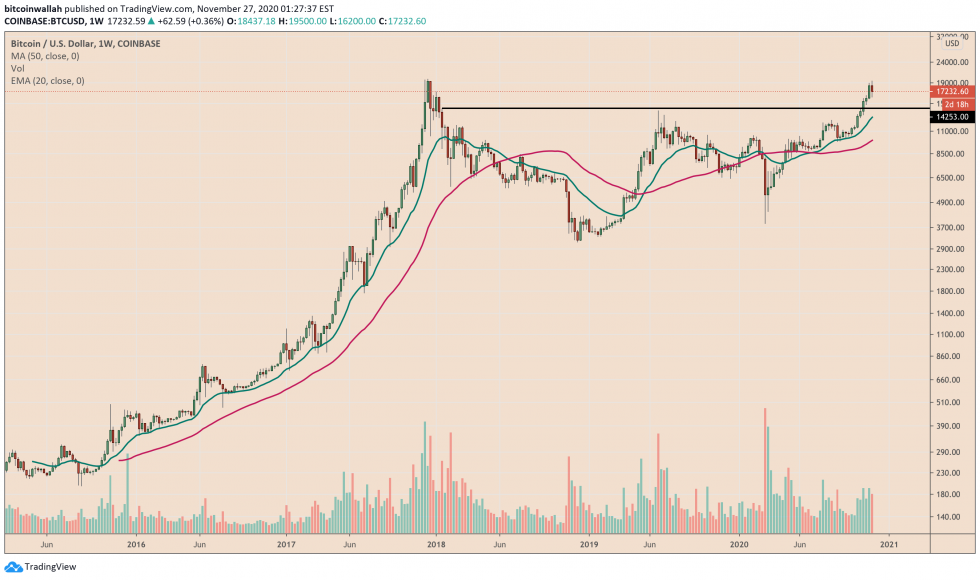 Second, Bitcoin’s 20-weekly moving average (20-WMA) sits at $12,928, expecting to close above $13,500 should the price consolidates following the latest dip. That further brings BTC/USD within the range of Mr. Brandt’s bearish target near $14,000. Meanwhile, the 20-WMA also holds a record of maintaining Bitcoin’s bullish bias.

“A 20 weeks MA serves as support [level] in a bear market [and] as a resistance in a bull market,” said a pseudonymous analyst. “The price of Bitcoin returns to it over and over again. Maybe, “This-Time-It-Is^Different,” but I personally don’t think so, and I will wait for that MA test.”

In case the price flips bearish on the 50-WMA support, it would risk undergoing an extended downside correction towards the 50-WMA. It sits near $10,000.