Bitcoin is rallying relentlessly, insomuch that it is touching a new yearly high every other day.

The past few weeks have witnessed the cryptocurrency in its most organically-driven bullish avatars. It broke resistance levels that first seemed too difficult to achieve ($10,500). It then built a concrete upside outlook upon the newly-found price floors, using macro narratives such as inflation to attract more quality capital.

The result is a new price breakout. This week, Bitcoin [almost] reached $16,500, a level it last tested in December 2017 during its bearish correction from its all-time high near $20,000 the previous month. None of the other anti-inflation assets (read gold) were able to match Bitcoin’s ascending momentum.

Bitcoin’s upside moves have finally made it an overbought asset. In simple words, its price is running way ahead of its average demand, as confirmed by the Relative Strength Index, a barometer to gauge “the magnitude of recent price changes to evaluate an asset’s overbought or oversold conditions.”

Ideally, Bitcoin should undergo a trend reversal to neutralize its excessively bullish bias. But traders have turned blind-eyed on the RSI that has been in an overbought zone since mid-October 2020.

Bitcoin posts consecutive weekly gains without a hint of a downside correction. Source: BTCUSD on TradingView.com

The BTC/USD weekly RSI—historically—has extended its welcome inside the overbought territory for months, as shown in the chart above. The pair may end up losing its upside strength after a while. Nevertheless, it is more likely to regain the bias as long as global fundamentals stay negative.

And from the look of market analysts, the Bitcoin rally is not going anywhere in the coming weekly sessions. The reason is…

…A Weak US Dollar

Strategists from the US financial sector believe the greenback is due to fall lower during a Joe Biden presidency.

It will allow the money to flow back into the emerging markets, thereby causing a value migration from the US dollar to foreign assets.

The US Dollar Index, which measures the greenback against a basket of foreign currencies, fell 1.92 percent last week after Mr. Biden gained lead against US President Donald Trump. 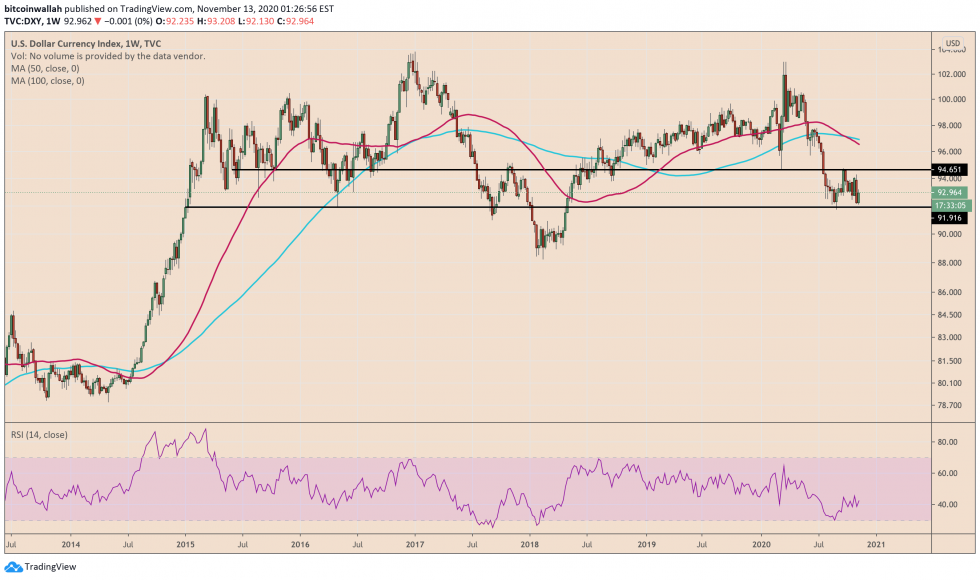 US Dollar Index is trading lower as Bitcoin upside momentum picks up. Source: DXY on TradingView.com

Nevertheless, the index recouped a portion of its losses this week as investors assessed a delay in the election counts, followed by uncertainty led by Mr. Trump’s lawsuits against the Democrats alleging election fraud.

In the views of legendary investors like Paul Tudor Jones and Stan Druckenmiller, Bitcoin is an ideal hedge against the US dollar’s bearish outlook. Their sentiments toward the cryptocurrency were on their prime this week as Bitcoin closed above $16,000.

So it appears, the cryptocurrency’s short-term downside correction is less likely to outweigh its long-term bullish bias (as long as the US dollar loses its purchasing power).

Khabib VS Holloway: the first ever Metaverse Fight to take place in Creed