A remarkable rebound this weekend has put Bitcoin back en route to $20,000, its record high to date.

The flagship cryptocurrency still closed the week in red, down 1.28 percent on the whole. Many factors contributed to its decline, primarily profit-taking as its price logged a three-year high at $19,500. Meanwhile, rumors about US Treasury Secretay favoring regulations for private crypto wallets also accelerated the sell-off.

But the weekend saw Bitcoin shrugging off a portion of those concerns. The cryptocurrency pushed itself higher after finding concrete support inside the $16,200-16,500 range. It was trading about 15 percent higher from its previous week’s low as of Monday, pointing to another attempt at breaking $19,500 and retest $20,000.

And the fundamentals favor the scenario.

Today, the US dollar hit 91.69 against a basket of major foreign currencies, its lowest level since April 2018. A CNBC report noted that optimism in the COVID-19 vaccine, coupled with bets on more economic stimulus in the United States, pressured the greenback lower.

The outperformance across the US stock market, with the S&P 500 posting its best month since April 2020, further pointed that portfolios would keep on holding riskier assets through their month-end rebalancing. That could also create a short-term downside pressure on the US dollar.

US Dollar Index breaks below its multi-year support trendline. Source: DXY on TradingView.com

A weaker dollar favors Bitcoin’s outlook. Its short-term risks create an ideal bullish setup for the cryptocurrency, especially as it adamantly waits for a $20k-retest. Bitcoin’s own fundamentals amid a dovish Fed and booming institutional adoption points to another record high in the making.

The Bitcoin market is starting this week on a positive note. As of 0650 UTC, BTC/USD was up 1.97 percent to $18,561. Its gains came especially after the Guggenheim Funds Trust filed an amendment with the US Securities and Exchange to put 10 percent of its reserves to Grayscale’s Bitcoin Trust.

Guggenheim has net assets of about 4.97 billion, meaning it can now invest close to $500 million in BTC.

“The dollar’s future weakness has been a favorite 2020 talking point for Wall Street economists such as Steve Roach. You can see why. There really are a lot of dollars around, even if their velocity of circulation has slumped because of the pandemic.” 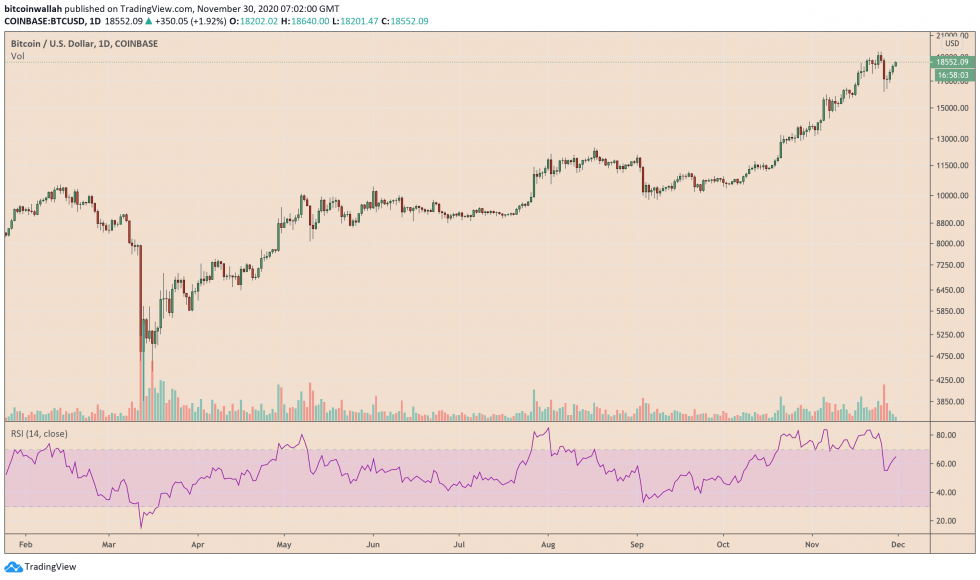 Bitcoin is up more than 300 percent after the Fed announced its bond-buying program. Source: BTCUSD on TradingView.com

So it appears, Bitcoin’s ascent looks inevitable this week thanks to a weaker dollar sentiment short-term — and long-term, as well.

75% surveyed say “No” to Bitcoin in “Money Saving Expert” poll