The benchmark cryptocurrency ascended to its lifetime record level of $24,300, up 22. as traders assessed its growing prominence as an emerging safe-haven alternative among institutional investors. The sentimental shift towards Bitcoin occurred as some of the most traditional hedging assets reflected a medium-term bearish outlook. That included the US dollar.

Factors including Brexit optimism, the coronavirus vaccine rollout, the US Federal Reserve’s dovish outlook, and hopes for a new US stimulus bill continued to pressure the greenback lower. Mirroring its weakness, the US dollar index, which tracks the dollar’s performance against a basket of foreign currencies, slipped below 90 for the first time since April 2018.

Many traders raised their bids for Bitcoin while anticipating that the dollar’s value would decrease further in the medium-term.

They treat the cryptocurrency as an anti-fiat asset, given its accurate negative correlation with the greenback since March 2020’s global market rout. BTC/USD has surged by more than 500 percent since then. The US dollar index, on the other hand, has fallen by up to 12.68 percent. 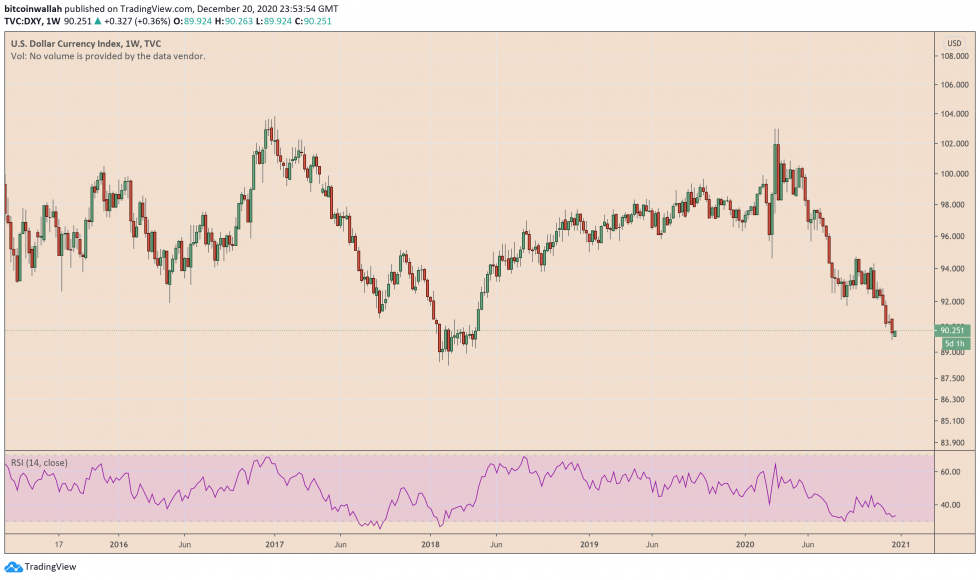 US dollar index shows signs of modest recovery from its yearly low. Source: DXY on TradingView.com

Following its last meeting of 2020 on Wednesday, the committee’s chairman Jerome Powell committed to continuing their bond-purchasing program. Meanwhile, the US Congressional leaders reached a deal on their $900 billion stimulus package. They both add more bearish pressure on the US dollar heading into the new week.

That, in turn, could prompt Bitcoin traders to—at least—hold gains above recently-established daily support levels above $23,000.

Fundamentally, the new week looks quite on macroeconomic levels. There are no significant events and data releases on the economic calendar that may influence an average Bitcoin trader to go drastically long/short on his/her trade. The upcoming Christmas holiday season is likely to keep most “whales” busy as well.

But technically, Bitcoin may attempt to correct its “overbought” levels, as seen through its weekly Relative Strength Indicator. As of now, the level is near 88, which reflects an overheated market. The first short-term support is near $23,318. Breaking below the said level would have Bitcoin test the following supports (in succession): $22,329, $21,252, and $20,000. 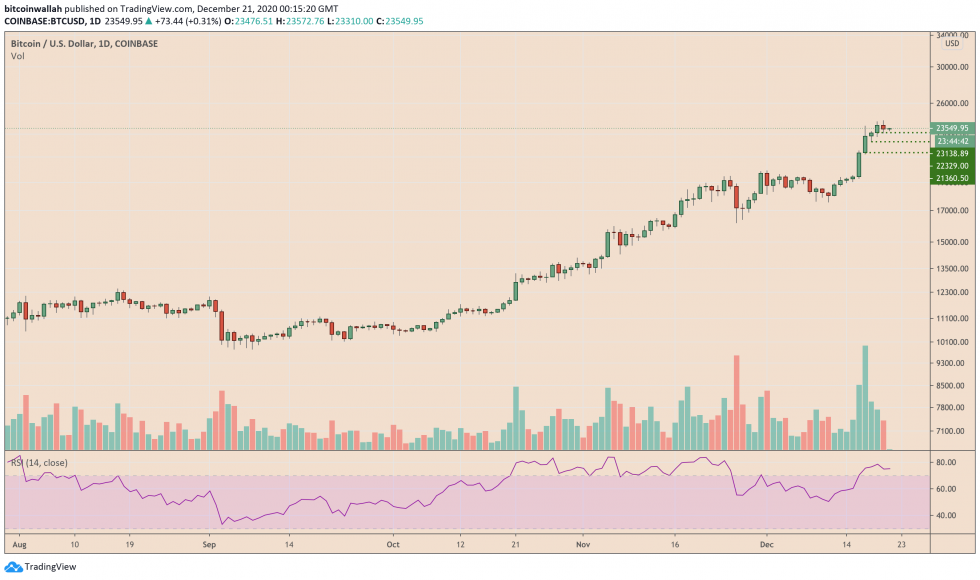 Meanwhile, the prospects of more dollar declines—especially on the stimulus news—could have Bitcoin RSI climb further into the overbought territory. That would mean another retest of its all-time high, followed by the possibility of touching more record highs into unchartered territory.

Looking at the Claims Celsius Operated Like a Ponzi

Ukraine Details What Crypto Donations Are Being Spent On