Bitcoin was designed by the pseudonymous Satoshi Nakamoto as the first way to transfer value electronically without the need for a third-party intermediary such as a bank. The cryptocurrency is only just over 12 years young, yet after this latest rally, it is about to reach an incredible milestone of over $10 trillion in value transferred across the network.

Here’s why this is especially notable, and what the next major $10 trillion dollar milestone means for Bitcoin.

Bitcoin is an asset unlike any other. It is one part cryptocurrency, and one part distributed ledger network called a blockchain. Users of the technology can send, store, and receive value in the form of BTC, all without having to rely on a bank.

Transactions are recorded on the blockchain for all to see, which also provides transparency and insight into the network itself.

Naysayers of the cryptocurrency fail to realize that the asset’s value is based on the underlying network, and the network effect is what pushed Bitcoin adoption. Price appreciation is simply a side effect of the technology spreading across the world. 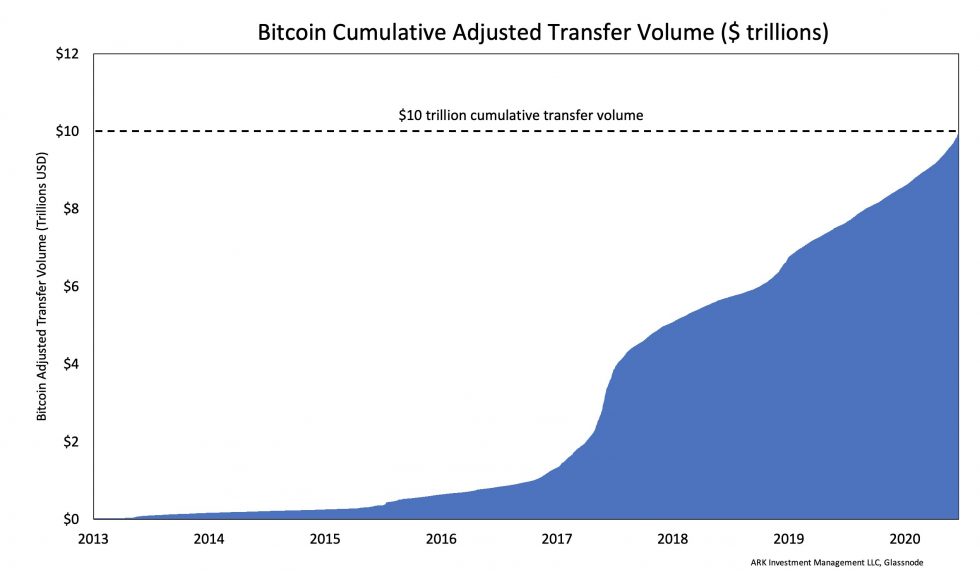 However, the network itself is close to achieving a milestone that even the cryptocurrency’s most opposed pundits will struggle to punch holes in.

According to publicly verifiable blockchain data, Bitcoin is only dollars away from passing a cumulative $10 trillion in USD value transferred across the network. This means that users of the cryptocurrency were able to move that much value all without a third-party or a bank that’s always been required to send that type of money in the past.

Bitcoin price is over $30,000, but most investors in the cryptocurrency expect the asset to eventually reach much higher prices. The primary driver of the asset’s market cap increasing from $200 billion to $600 billion, has been the “digital gold narrative.”

The narrative isn’t entirely due to how the cryptocurrency beats the aging yellow precious metal in almost every way, but how gold’s market cap could come flowing into Bitcoin because of it.

Gold’s market cap is over $10 trillion, which sets the bar for what Bitcoin can theoretically absorb from gold. At a milestone $10 trillion market cap for the asset, each BTC would be worth nearly $500,000.