Bitswage
Home Bitcoin There is 59% Chance for Bitcoin to Continue Its Bull Trend; Here’s...

The benchmark cryptocurrency opened higher at $27,039 and hit an intraday low of $25,833 in early trade volatility. However, traders treated the downside correction as their cue to accumulate at cheaper rates. A retracement ensued, and the BTC/USD exchange rate reclaimed the $27,000-support. The pair hit $27,336 before closing the day at 1.21 percent higher.

In doing so, Bitcoin formed a small-bodied bullish candle on its daily chart that resembled a Hanging Man candlestick pattern.

What is Hanging Man?

The term reflects the candle’s shape formed on Tuesday, with a small distance between its opening and closing rate and a longer lower wick to the downside. The pattern also has a negligible upper shadow, which—as many technical chartists believe—makes it a perfect Hanging Man indicator. 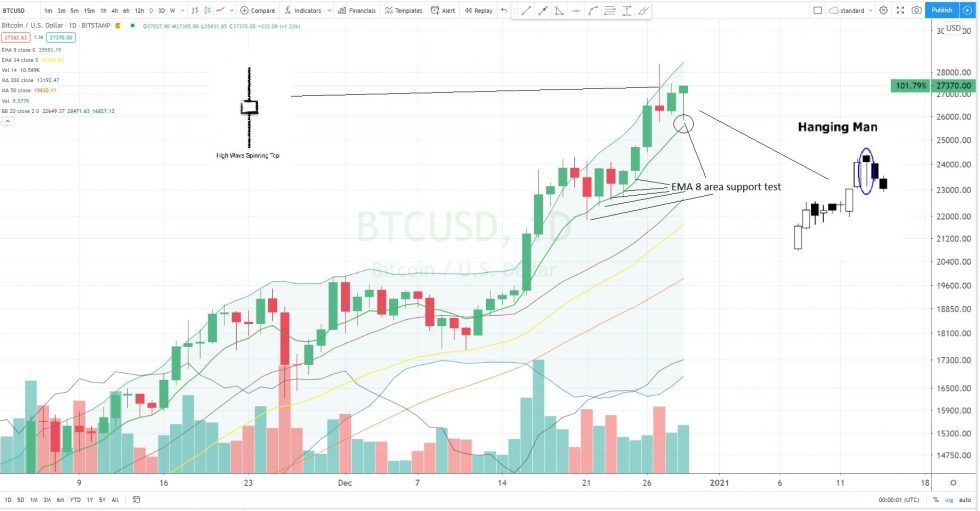 The chartist further cited textbook descriptions that claimed Hanging Man as a bullish continuation setup, with a 59 percent possibility of sending an asset’s prices higher. While sharing the screenshot of the description, Mr. Cheds also coupled his technical analysis to support the bullish setup—by noting a strong buying sentiment for Bitcoin near its EMA8 area support wave.

The Bitcoin price could likely continue its prevailing bull run in the $29,000-$30,000 range unless it decisively breaks down to neutralized its technically overbought signals. Bitcoinist has discussed the bearish outlook here.

But many leading analysts other than Mr. Cheds have also given an optimistic outlook about Bitcoin. Dan Tapeiro, the co-founder of DTAP Capital — an investment firm in Connecticut, said the cryptocurrency could launch a run-up towards $53,000 while eyeing a total market valuation of $1 trillion.

“Institutional adoption in the first inning. At $1T, every investment committee will need to have a discussion. Expect liquidity to become more important than privacy.”

Bitcoin’s market cap is currently near $500 billion, led by a dramatic rise in its institutional adoption as a safe-haven, anti-inflation asset. The cryptocurrency’s latest mainstream investors include MicroStrategy, Square, Ruffer Investment, MassMutual, Paul Tudor Jones, Stan Druckenmiller, and many others.